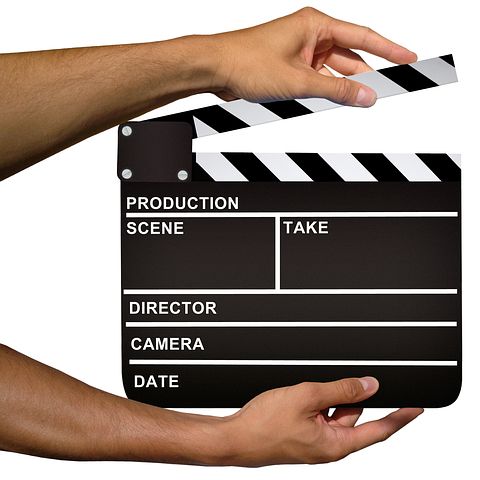 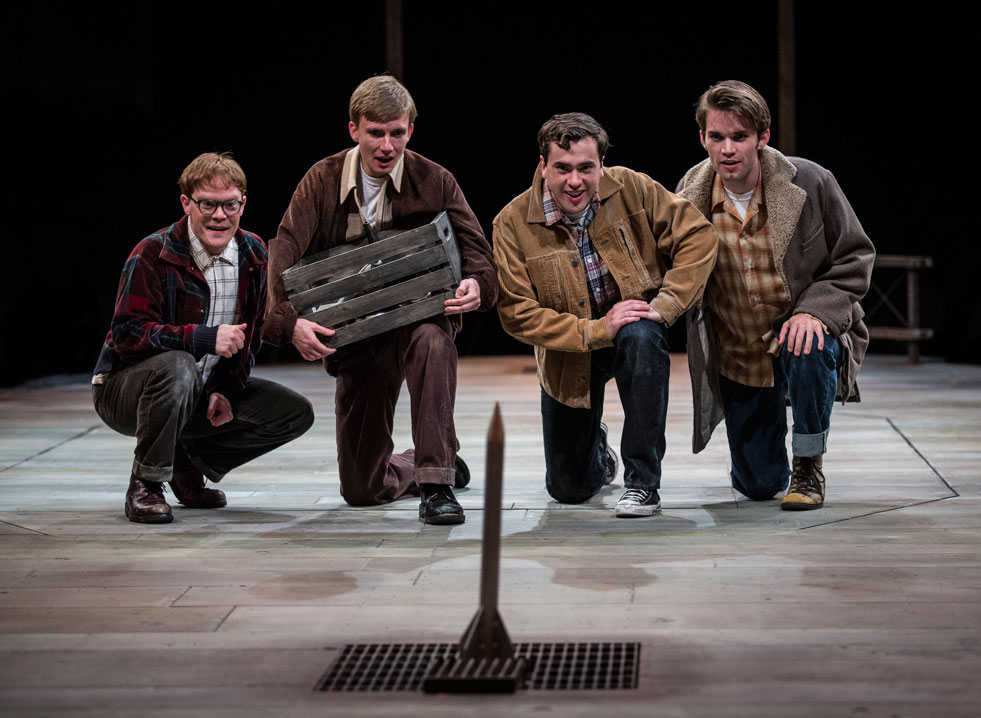 My daughters and I decided to watch the movie October Sky this past week together as our homework for Master Keys.

Based on the true story of Homer H. Hickam, Jr., a coal miner’s son who was inspired by the launch of Sputnik 1 in 1957 to take up rocketry against his father’s wishes and eventually became a NASA engineer.

It seems as though my inner focus these past several weeks has been on persistence. And I am seeing that it really goes through phases…. 1st I was feeling stuck and unmotivated. Slightly confused also as I really wanted the results I had stated but was not motivated to do the work in November.

Then as we started Scroll 3 in December my motivation picked up and enthusiasm came back…. I know that the 3x/day reading of scroll 3…. I Persist Until I Succeed had much to do with that!

Now…. I am really recognizing that I am becoming “single eyed focused” in my thought and actions this past week…. letting go of a lot of “things”, obligations, and old blueprint thoughts that don’t support my Definite Major Purpose.

So as we watched the movie I got a good grasp on the 4 habits of persistence that we learn about and implement through Master Keys. This movie very clearly told the story… in a hero’s journey story line with all 4 habits.

Homer Hickam wanted to build a rocket that would fly into space.

He was surrounded by classmates, friends, his town, even his father who told him he couldn’t do it. Classmates made fun of him and called him names. His father told him that his choice of career would be to follow in HIS footsteps of being a coal miner.

But Homer kept his FAITH and ONE-EYED FOCUS on his dream…. his bliss…. his DMP…. definite major purpose- to build that rocket.

Homer had his heros journey call presented to him via the launch of Sputnik in 1957. He watched with inspiration as the Sputnik traveled across the evening sky and lit his heart on fire.

He sought out books about spaceship building… renewed interest in chemistry class as they found different combinations of chemicals that became explosive.

Through his ENTHUSIASM he attracted 3 other students to him that were HELPERS in manifesting a rocket that would fly. Even one of his teachers believed in him so much that she gave him a book on how to build rockets.

Along the way of his journey he had many challenges…. rockets built that didn’t fly…. exploded on the ground. People who accused him of stealing items to use in building the rockets, and even his father who became injured in a coal mining accident that ended up forcing Homer to drop out of school an go work in his fathers coal mine for a period of time.

You could see Homer’s inner light of enthusiasm virtually disappear over night while he was working in the coal mine.

Yet one day  he woke up…. he had his death and rebirth of transformation realizing that he was living his life for others instead of following his heart.

Through most of his journey he was able to keep a POSITIVE MENTAL ATTITUDE which you could see rub off onto the 3 other students who were his helpers.

His PLAN OF ACTION was to keep trying…. keep building another rocket…. keep testing each one and keeping written documentation of how they were built… with what materials… and how long and high it flew.

Homer had several people as his mastermind partners: His 3 buddies that helped him build and test the rockets, Rocket scientist Wernher von Braun who was his major source of inspiration, a teacher who believed in him.

Finally, Homer and his buddies won the gold medal in the 1960 science fair which then allowed him to attend college. By 38 years old he was working for NASA making many contributions for our current day space travel.

Here is an awesome example of a young man who against all odds of breaking out of a generational blueprint of financial hardship, lack, and coal mining occupation…. broke out and followed his heart.

Despite negativity all around, what seemed like lack of resources to make it happen…. once he accepted his PERSONAL TRUTH and followed his heart…. kept the FAITH of one-eyed focus of his DMP…. he became at one with his purpose…. and it came true.

BIG BIG AHHA AND LESSONS FOR ME!!! 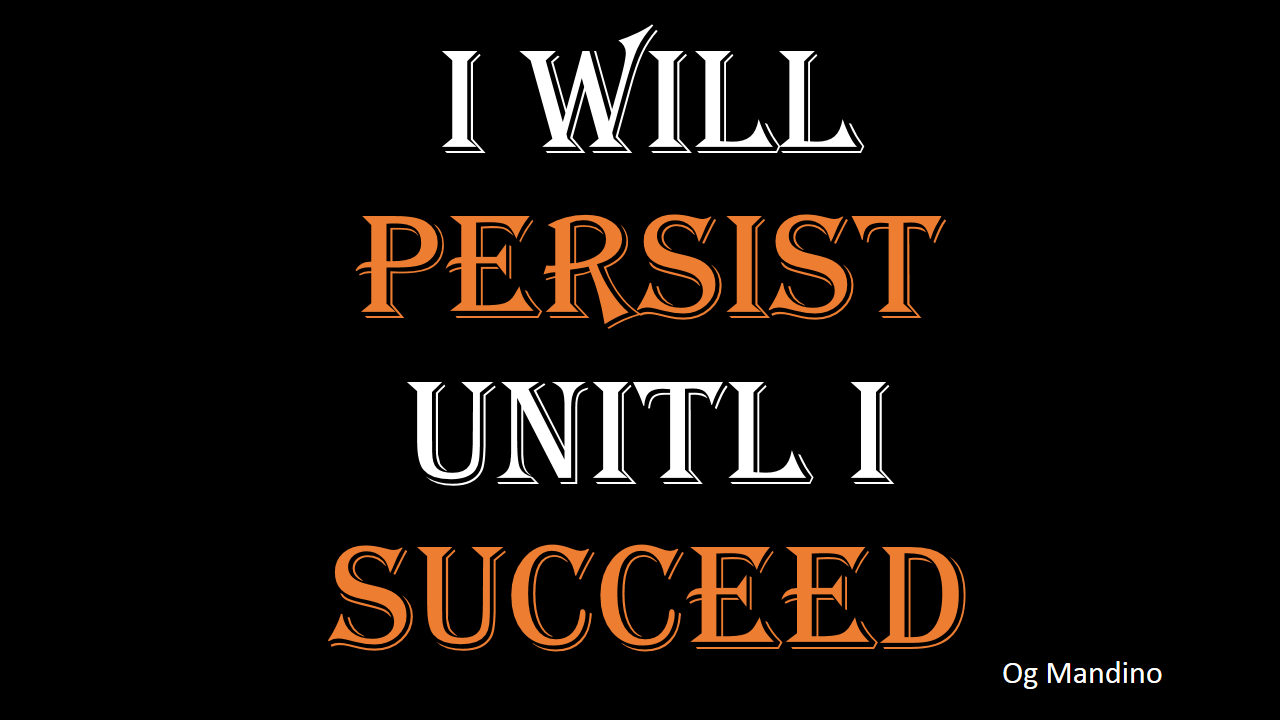 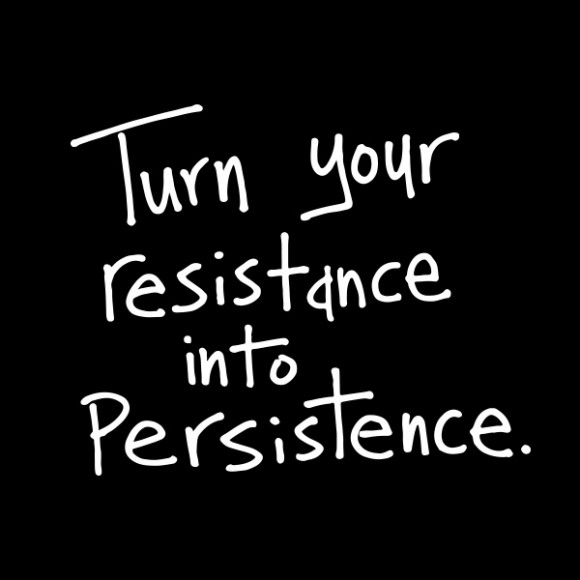 firm or obstinate continuance in a course of action in spite of difficulty or opposition.

yep. I’m getting it. My outlook has become much more positive and happy. I’m keeping up with much more of the homework.

What is really cool is that I actually can feel that my new habits… mental diet, following the law of substitution, law of giving, looking for what is right, all this feels like it is really a part of me.

I like the above definition especially the part of “obstinate continuance” because truthfully for the past couple of months that’s exactly what it felt like. I felt very obstinate.

What I recognize is that it definitely was my subconscious old blueprint digging its heels in to try to rescue and save itself from the changes.

It is definitely getting easier and feeling much more aligned to me. 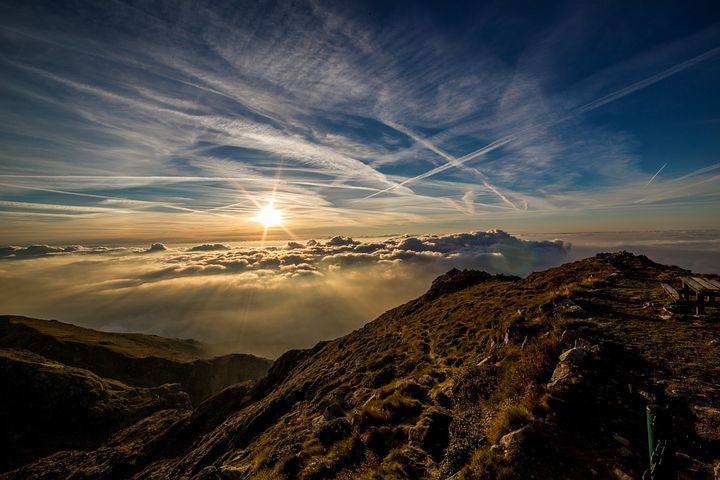 Today I recommitted to doing The Sit.

After being on the webinar yesterday for the Go 90 Grow skills…. Mark J made a comment about the “pushback” of change and new habits really comes from the conscious mind not the subconscious. This was a lightbulb moment for me as I was believing that it was the other way around. And that I was thinking my intuition and subconscious was rebelling to things that were not right or aligned with who I am.

Now that I really think about it…. I get it. Subconscious only takes direction…. from the conscious. I know this. My conscious ego was getting in the way!!

And talk about those “inexplicable things”….. my week has been full of them!

I have been drawn to take a challenging trip of mountain climbing…. I want to experience the Skylodge Hotel in Peru’s Sacred Valley…. see a video of it here and another here.

I was drawn to watch a video made by my mentor and personal sponsor Dave Ulloa in my network marketing company not once… but 3 times… it is about his personal experience summitting Mount Kilimanjaro in Tanzania Africa. I was drawn to it as he speaks to having a “mission worth fighting for”. And of course its about a mountain. See it here

I have had this image as my facebook picture for the last several weeks….. 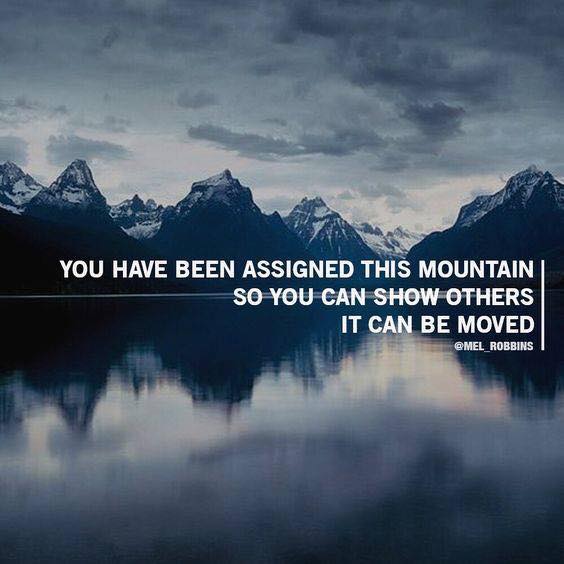 This is what I have been looking at- at my desk in my office: a postcard I picked up when at the MKMMA Live last May…. my favorite of the Napali Coast….. and TOTALLY UNAWARE TIL NOW… the screen saver I picked just 2 months ago of a girl running on the beach in front of MOUNTAINS…. 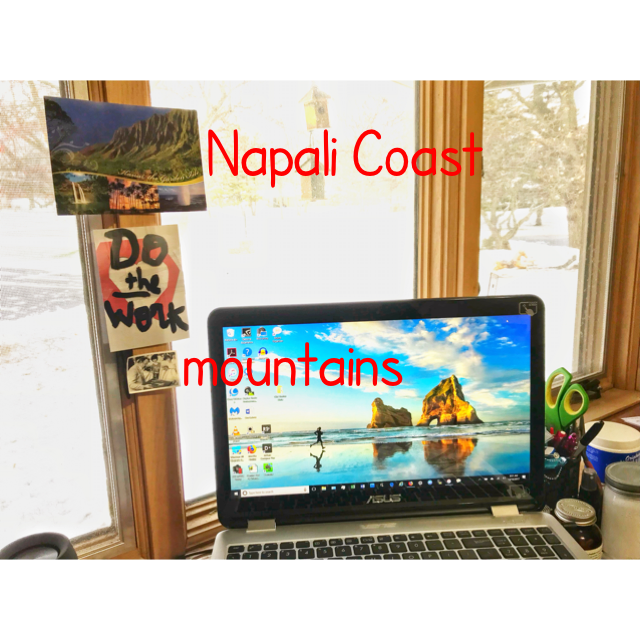 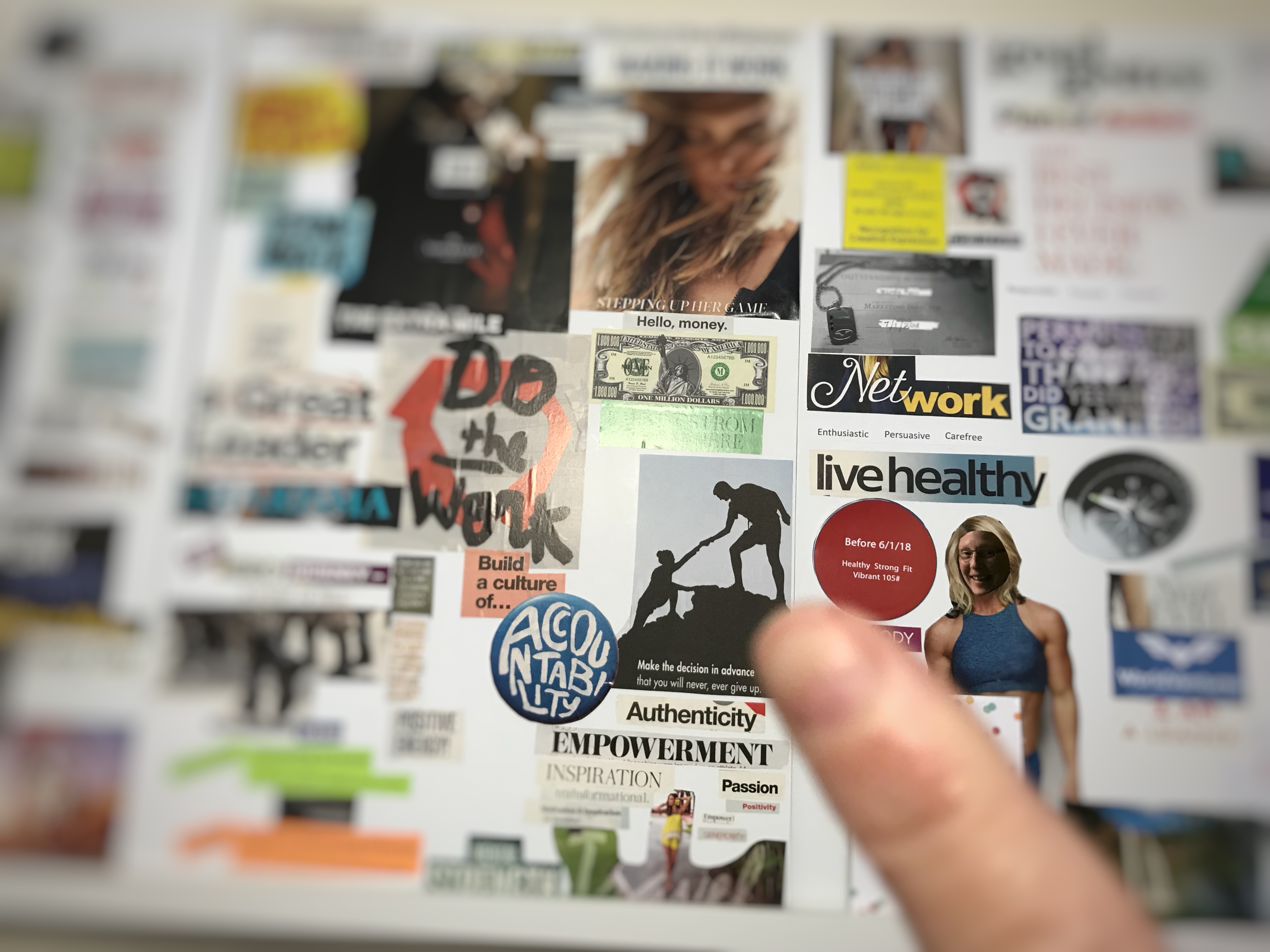 This morning I woke an hour before my alarm was to go off… 5:30am. Wide awake…. just dreamt that I was watching my grandkids ( I love them soooo much…. my day STOPS when I am with them) and we were at an indoor park….. I looked over to where my purse was… and it was GONE. My wallet… credit cards…. cash…. GONE. And in the moment I woke up…. I heard Mark J’s voice loud and clear saying ” SUCCESS CONSCIOUSNESS”

I decided right then that it was time for me to see the good in this dream. It was time to WAKE UP.

So I started my day earlier than planned. Got out of bed, showered, ate breakfast, and enjoyed a beautiful short clip of Bethany Williams sitting amongst the beautiful mountains in Nepal with the simple line of “This morning I’m reminiscing of Nepal and the incredibly beautiful mountain scenery. #nepal #scenery” see it here

I get into my sit. It’s been a long time since I’ve done it. And my mind begins to wander… I decide to use the phrase “success consciousness” (and in Mark J’s voice) as a focus to keep me in my sit.

It starts to make sense…. what it all means.

My peptides are addicted to CHALLENGE. And as of lately negative challenge.

My personal trainer at the club said it to me twice last week…. “I see you like a challenge” and gave me more weights and reps…. and I rose to the challenge.

My life has revolved around 24 years of intense martial arts training………. challenge.

Working for many years in a hospital in a high risk setting of sick moms… delivering their sick babies.

I survived against all odds of a year fighting cancer…. chemo… surgery…. radiation…. recovery.

My husband and I survived financial loss of our business of 37 years.

We survived the loss of our house.

I have traveled the world and have had really cool experiences…. challenges….. martial arts training in South Korea 3 times. Staying in a Buddhist Temple to learn the culture. Hiking the inside of a crater of a dormant volcano. Hiking a rain forest. Snorkeling amongst jelly fish. Walking around Munich ALL NIGHT LONG at 15 years old without the ability to speak German and no map…. with a man who was to become my husband.

And then it hit me.

I DO like challenge. The kind that is fun and immediately gives me the desire to rise to the occasion and prove to myself that I can over come it…. accomplish it…. experience what many others don’t or choose not to.

So why do I repel from the challenge in my business? Fear…. Fear of rejection and being seen as so different. Fear of being looked at with judgement of my desire to rise successfully so far above others that some might think “against all odds”. Hmmmmmmmmmmmmmmm….

I DO like challenge. It is what makes me come alive and makes life juicy. It’s the stories I reminisce about ALL. THE. TIME.

Soooooooo…. all these inexplicable things have helped me to see the gift in this for me….. I love challenges!!! AND IT IS TIME TO PUT THE SPECIALIZED KNOWLEDGE I NOW HAVE TO WORK AND CREATE THE CHALLENGES I WANT TO EXPERIENCE! 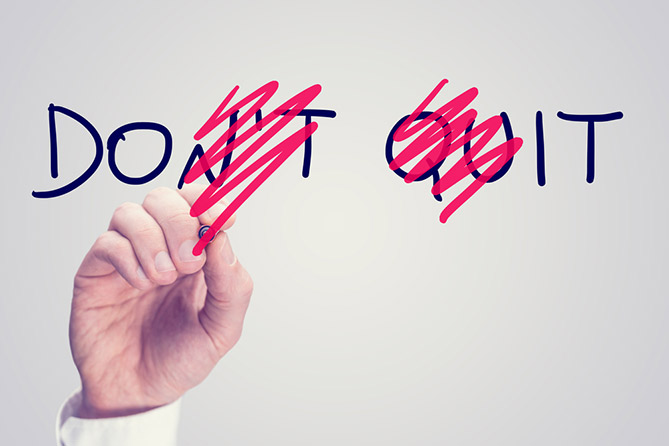 These past couple of weeks I have been caught up in a lot of negativity and stinky thinking. And I am not going to dwell in that side of the story any more.

What I have really had a big insight about over these weeks is how much I need to work on my attitude and thoughts.

The mental diet has been started over and over this week…..  and I am more and more aware of my thoughts and how they are impacting my reality.

Only three days into Scroll 3 in The Greatest Salesman in the World… and I am loving this Scroll!

Actually… everything has boiled down to 2 most important things for me:

I think Scroll 3 is my favorite so far!